Antonis C. Indianos was born in Limassol in 1899. His father Konstantinos Mantrali, later known as Indianos,was from Peristeronopigi of Famagusta district, and his mother, Ermioni Christodoulou Zavrou, originated from the well known family Tomasou of Kritou Terra, of the Pafos district.

He finished the Greek Gymnasium of Limassol and spent three more years at the American Academy of Larnaca from 1917 to 1919.During his stay there he became friends with the writer Meli Nocolaides who was the editor of the Cyprus Magazine «Icho tis Kyprou» (The Voice of Cyprus) in which A.C.Indianos published his first poems.

He went on as a University Law student at London’s Middle Temple, and became Barrister-at-Law in 1923.During his stay in England, he followed english literature courses at Oxford University in 1921 and 1922.During that period he published articles on english literature in the Athenian literary magazine ‘Nouma’ of Tagopoulou. 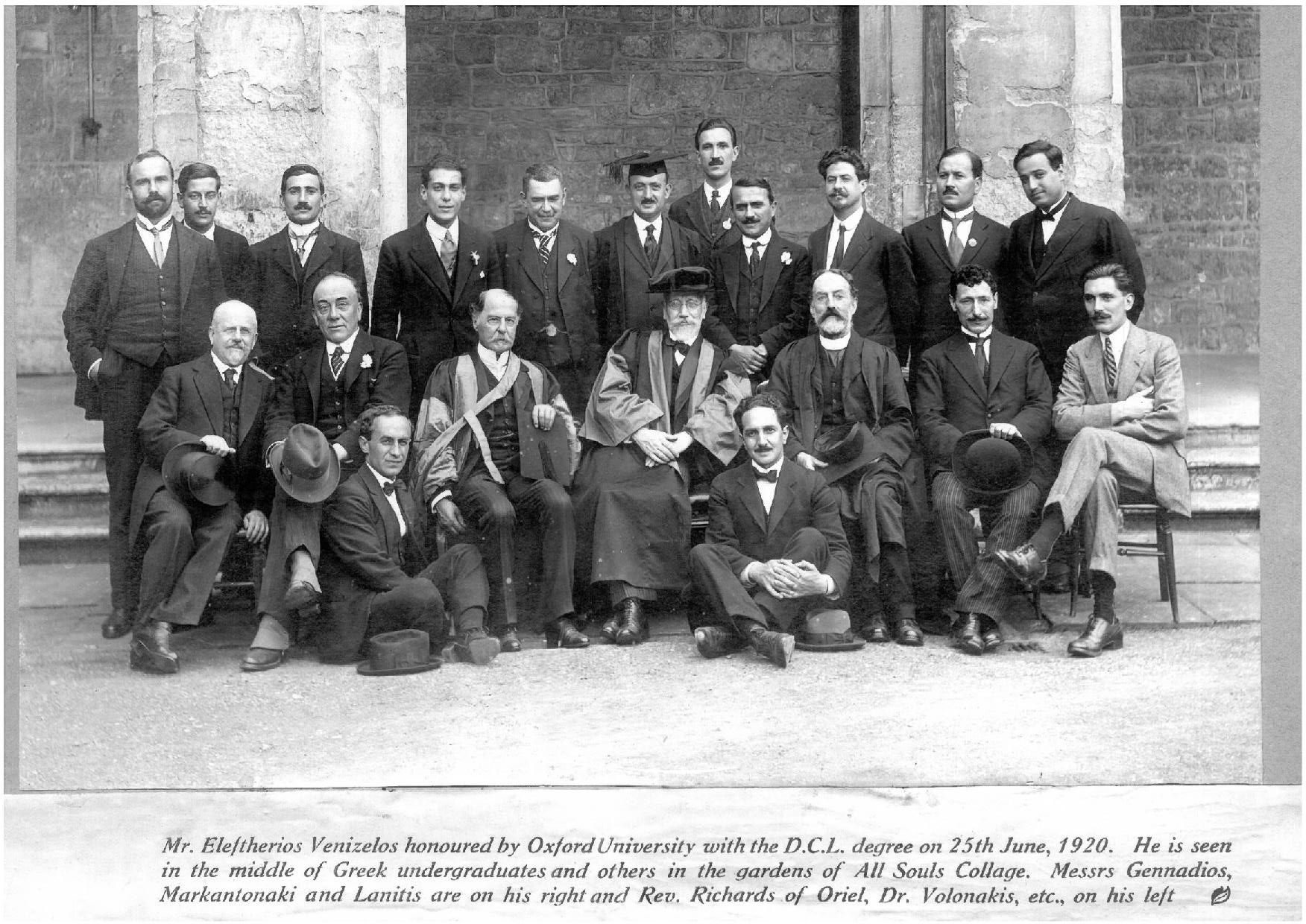 Antonis.C.Indianos is last standing on the far right.

He worked as a lawyer in Limassol from 1924 to 1929.On his return to Limassol,as a fanatical promoter of the greek language, he became one of the closest colleague and activist of the first literary magazine ‘Avgi’, 1924-25 and founded the literary  «Association of the twelve». He cooperated and worked with many Limassol newspapers, and was a member of the Education Coucil of the Limassol District (1926).

In the years 1929 to1930, he became official translator of the colonial government as well as a member of the Parliamentary Council (1930-1931).His title then changed to  ‘Greek translator’ (1932-1937).He was a founding member of the “Εteria Kipriakon Spoudon’(Cyprus Studies Society) and part of it from 1936 to 1943. In 1937 he was transferred to the Archeological unit and in the same year obtained a scholarship to Oxford University’s Carnegie for Classic Archeology (Sept.1937-Aug.1938).It is between September 1937 and august 1938 that he became the first to discover the tomb of the great Greek poet of the 1821 Greek Revolution, A.Calvos, in the little village of  Louth in Lincolnshire (the photo below is itself the evidence of the above statement).He came back to Cyprus in 1939 where he was nominated inspector of the Middle-Ages Museum and Library master of the Cyprus museum until 1942, when he became a lawyer once again and excelled, especially in the field of Criminal law.

In 1934 he founded along with Kostas Prousis and Nikos Kranidiotis the magazine “Kipriaka Grammata” (Cypriot Letters) 1934-1956, magazine to which he was the spirit, the first director as well as the first responsible for its edition .At first, the magazine was edited every 15 days, and then every month. Furthermore and related to this period an important correspondance attests of the relations between A.C.Indianos and the great Greek and English 20th century writers and poets Angelos Sikelianos (1935), Kostis Palamas (1936), Rudyard Kipling, Osbert Sitwell, Alexandros Palli, Petros Vlastos, Tello Agra, Aimilios Hourmouzios, Loukis Akritas, Vassilis Tatakis, Nicoloaos Tomadakis, Georges Valetas, Georges Zoras, as well as the historian Georges Hill.

During the decolonisation struggle of the 1955-1959 period, he helped Ε.Ο.Κ.Α fighters, defended them for free as a lawyer, and was one of the advocates of hero Michalakis Karaolis who was executed after the trial (see photo below). There is also evidence that he was giving secret informations wringed and taken from the enemy to a priest of the Archdiocese of Cyprus. In july 1955 he was elected a member of the Committee which represented the Nicosia Bar Association at the Pan Cyprian Advocates Reunion whose aim was to abolish the enactment, on July 15th  1955, of the law allowing conviction without trial. It an also be mentioned that both Rauf Denktash, long time leader of the Turkish-Cypriot minority and Tassos Papadopoulos, former President of the Republic of Cyprus did their practice at the office of A.C Indianos.

On April 10th 2002,at the commemorative ceremony in the honor of the lawyers who had defended E.O.K.A fighters in 1955-59, A.C.Indianos was subsequently  awarded “Timis Eneken” the Medal of Freedom of the Republic of Cyprus from the President of the Republic of Cyprus, Glavkos Clerides with whom he had defended E.O.K.A hero Michalakis Karaolis in 1955 (see photo below).

Lawyer,poet,critic,translator,prose writer,and archeologist, A.C.Indianos became a specialist of the Byzantine Empire, the Middle-Ages and the recent period of Cyprus History, and many of his works have been published in the ‘Cyprus letters’, the ‘Cyprus Studies Society’ and the Nicosia magazine ‘Kypriaka Chronika’(Cyprus Chronicle).Furthermore, there is now a collaboration between the University of Cyprus and the Committee of the A.C.Indianos Archives.